Now’s your chance to have a magical Halloween at the Hogsmeade Halloween Carnival ! Use Tokens earned at Hogwarts to play games at the carnival and turn your Prize Tickets into fun, carnival rewards. 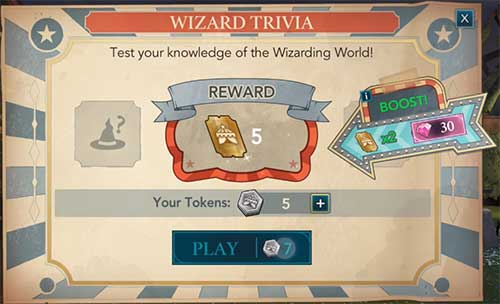 look at hogwarts mystery wizard trivia for the complete list of question and answers, you can also check below list of the new halloween wizard trivia : 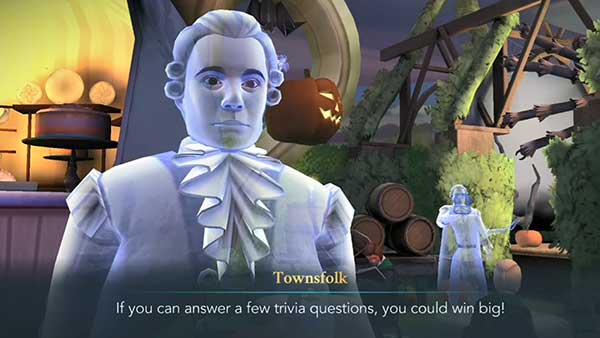 Cecil Lee works for the Werewolf Capture Unit and is also…?
Barnaby’s uncle

From what Celtic festival does Hallowe’en derive its name?
Samhain

How did the Bloody Baron die?
He took his own life

The Hallowe’en Feast occurs on what day of the year?
October 31

What extremely dangerous beast is also known as the ‘Living Shroud’?
Lethifold

What folktale figure are jack-o’-lanterns named after?
Stingy Jack

What is Hallowe’en also known as?
All Hallows’ Eve

What were jack-o’-lanterns originally carved out of?
Turnips

What’s another name for a carved pumpkin?
A jack-o-lantern

Where did Hallowe’en originate?
Ireland

Which creature is most associated with Hallowe’en?
Black cats

Which of these is not a Hogwarts ghost?
Erling the Great

Which Ravenclaw ghost is quite chilling to many non-Ravenclaws?
The Grey Lady

Who cursed Merula so that she could not see?
Ragnuk the Goblin King

Who grows the enormous pumpkins used for the Hogwarts feast?
The Hogwarts gamekeeper

Who is King Ragnuk the First?
Maker of the Sword of Gryffindor

Who is rumoured to destroy the castle’s pumpkins every year?
Pumpkin Johnny

Who is tasked with catching werewolves deemed to be a threat?
The Werewolf Capture Unit

Who originally told the legend of the Deathly Hallows?
Beedle the Bard

Who shared his Deathday party with Nearly Headless Nick?
Erling the Great