Walkthrough for Harry Potter Hogwarts Mystery Duel Guide – in Year 1 Chapter 3 – after you play gobstones with rowan in courtyard, merula will bully both of you and cast a spell on you. So you need to learn more spellls and find someone who can teach you how to duel. In chapter 4 your prefect will teach you how to duel !

First you need to find secret duelling book hidden in artefact room, that will teach you various spells, potions and techniques. Then talk to Professor Flitwick for self-defence spell to disarming your opponent, Expelliarmus and finally learn Tickling charm, Rictusempra with Rowan.

In Chapter 5 meet your prefect in courtyard and practice duelling with rowan, you will need 2 courage 1 empathy 2 knowledge to start.

this is a rock – paper – scissors game where :
SNEAKY > DEFENSIVE > AGGRESSIVE > SNEAKY 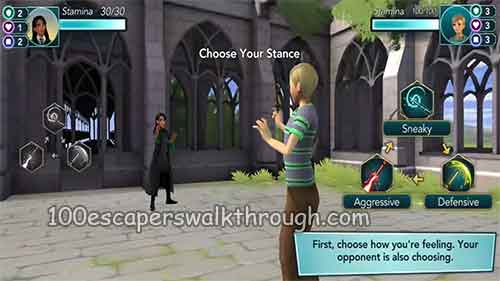 First choose how you’re feeling. Your opponent is also choosing. You will have 100 stamina and if it goes into 0 then you will lose the duel

If your stance is stronger than your opponent’s stance then you can choose the actions for each move :
Sneaky :
Throw Object – Medium Reduction in opponent Stamina
Rictusempra – Chance of medium Stun

Aggressive :
Throw Object – Medium reduction in opponent Stamina
Flipendo – Quite simply knocks back the caster’s target
Distract – Chance of small Stun
Incendio – conjures a blast of flame that can set anything alight (can give burning effect)

If it’s a draw then the player with lowest stamina will have +1 heal
You can get bonuses for having high attribute levels.
As you learn more spells in year 2+ you will get more spells unlocked !

now in next quest, you will need to defeat merula ! good luck =)
in year 2 you will fight Bill, Ice Knight on normal chapter and Ben, your prefect, merula on side quest

For now there are no Player vs Player yet, and when playing against the opponents seems they got easier to defeat since the last update. So the taunt for stun and healing action is not necessary, all you need to focus is to attack the opponent and make their stamina decrease into 0. Enjoy the game =)