Walkthrough for O.W.L. Exam Answers Harry Potter Hogwarts Mystery – Get an Outstanding Passmarks for your OWL examinations results from ministry of magic wizarding examination authority ! of course there’s also Practical exam to complete, but we will help you for all the written exam question and correct answers 🙂 you can find all the answer for O.W.L. from activity of study and revising with your friends !

written exam which will test your ability to recall effects, facts and recipes of certain potions

In which scenario would you use a Deflating Draught ?
– Inflicting Disappointment
– Reducing a Target’s Ego
o Nulling Effects of Swelling Solution

Which is a possible side effect of Pepperup Potions ?
o Steam Coming Out of Ears
– Sneezing Fits
– Excessive Mucus

How many Lionfish Spines are used in one batch of Herbicide Potion ?
– Five
– Zero
o Four

How long should a Polyjuice Potion stew before usage ?
– One Day
– One Week
o One Month

What is the incantation for the Exploding Charm ?
o Bombarda
– Accio
– Depulso

Which of the following is NOT a type of Transfiguration ?
o Summoning
– Vanishment
– Conjuration

How many Principal Exceptions are there to Gamp’s Law of Elemental Transfiguration ?
– Ten
– Three
o Five

Which of the following would be the easiest Transfiguration ?
– Thimble to Thestral
o Porcupine to Pincushion
– Armadillo to Pillow

Touching the trunk of a Wiggentree protects you from what ?
– Illness
– Injury
o Dark Creatures

Which of the following is NOT another name for Belladonna ?
– Deadly Nightshade
o Flitterbloom
– Atropa

written exam to test your knowledge of the needs, habitats, and behaviours of magical creatures

How often does a Streeler’s shell change colour ?
– Every Minute
– Every Day
o Every Hour

there will be no practical exam, instead the exam will be entirely composed of a written portion … make sure you’ve memorised important dates, names, and events in wizarding history

Which clause in the Code of Wand Use prohibits non-humnas from using wands ?
o Clause Three
– Clause Five
– Clause Eight

Why did Liechtenstein not attend the first meeting of the International Confederation of Wizards ?
– A House-Elf Protest
o Their Stance on Troll Rights
– An Overtime Quidditch Match

How many times did Wendelin the Weird allow herself to be caught by witch-hunters ?
– Forty-Five
– Fifty
o Forty-Seven

Who killed Emeric the Evil in a duel ?
– Godelot
o Egbert the Egregious
– Andros the Invincible

What was the primary reason for the creation of the International Statute of Wizarding Secrecy ?
o Persecution by Muggles
– Anti-Muggle Sentiment
– Need for Privacy

In which of these scenarios would you use the Impediment Jinx ?
– To Bind an Opponent
o To Slow a Rushing Opponent
– To Disarm an Opponent

What is the incantation for the Tongue-Tying Curse ?
o Mimblewimble
– Incarcerous
– Impedimenta

so did you pass with Outstanding mark for all class ? 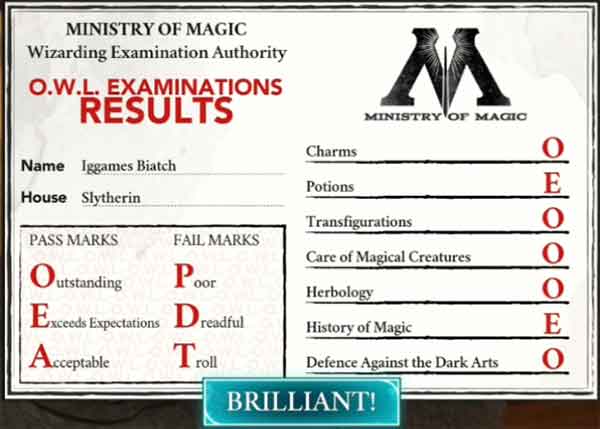 and if you need help for each time of this side quest activity, you can look on Take the OWLs Harry Potter Hogwarts Mystery Walkthrough