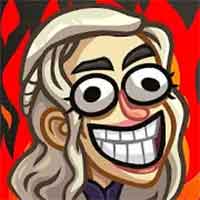 troll face quest game of trolls level 17 walkthrough
drag from right to left so the terminator will pop up with TV
tap on arnold so he will go ouf of the screen
tap on TV to see arnold sitting on the thrones
tap on george rr martin 2x to see john snow and win the game !

Troll Face Quest always pays his debts parodying the world’s best TV shows 2019 : the game of thrones ! So join him on his latest mock-filled mission as you click and tap your way through seven, eight, or maybe even nine kingdoms filled with humor and hijinks. Or you can watch all level guide of troll face quest game of trolls solutions