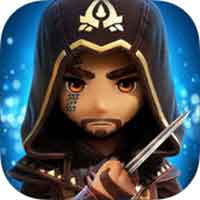 Assassin’s Creed: Rebellion By Ubisoft on android and ios iphone

Experience a completely new take on the franchise Heroes and gameplay :

Assassin’s Creed Rebellion Shadow Class
shadow class heroes like Aguilar specialize in stealt approach and avoiding direct combat
Aguilar is an expert at freerunning. He can navigate the environment with ease, and use paths closed to other heroes.
He can also perform silent assassinations. Use his skills to find the best way to complete the mission !

Assassin’s Creed Rebellion Enforcer Class
Enforcer class heroes like Tariq specialize in direct melee combat.
As an enforcer, tariq can both suffer and deal more damage in combat than Aguilar.
Tariq also has special skills to triumph more efficiently over enemies in combat.

Assassin’s Creed Rebellion During Combat Guide
Characters can act when their combat gauge is full, which takes a certain number of combat seconds to fill, depending on their weapon speed.
Characters with faster weapon speed have a chance to get the initiative and act first, but also to act more often.
Combat skills automatically recharge after being used, over a certain number of combat seconds.

Assassin’s Creed Rebellion Building Rooms Guide
Each room provides a different benefit or enables certain activities to take place.
Building a room requires coins, wood and sometimes stone resources.
A new room may only be built when there is an empty room slot available.

BUILD YOUR OWN BROTHERHOOD
Rediscover the legends of the Assassins Order as never seen before.
Team up with more than 40 characters, including Ezio, Shao Jun, Aguilar and many other new characters.
Train and promote them to the highest ranks to strengthen your Brotherhood forces and defeat the Templars’ plans.

INFILTRATE TEMPLARS STRONGHOLDS
Send your Assassins team on covert missions throughout Spain.
Choose the perfect combination of heroes to achieve the objective.
Develop your own strategy and use your Assassins’ unique skills to infiltrate the Templar strongholds and stop their plans.
Fight your way through, or apply a more stealthy approach? Choose wisely.