Walkthrough for Pixel Survival 3 Gameplay is available on iOS and Android device – Be part of an EPIC ADVENTURE in the world of Pixel Survival Game 3. Because this is the island SURVIVAL game where you can FARM, BUILD, EXPLORE, COLLECT TREASURE, PVP, SURVIVE and MORE! 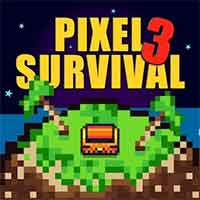 Pixel Survival Game 3 By Cowbeans on android and ios iphone

Build your base on a deserted island, farm crops and animals for food. Collect resources and craft items. Invite your friends to your world and show off your crafting skills. Ride horses together and explore the giant island!

Features :
☠ Singleplayer and online multiplayer with up to 4 players
☠ Fight together with your friends, or FIGHT your friends in PVP combat
☠ Adventure together in survival mode
☠ Fight side by side in Arena mode for treasure
☠ Raise pets
☠ Farming crops and animals
☠ Item crafting
☠ SURVIVAL

To survive the 2nd night, you should collect as much materials as you can and then build a “base” where you will be protected. Collect the food, stones, sticks, and fibers and craft a pick axe, axe and dagger. With these 2 tools, you can mine rocks for other ores and chop trees for resources and the dagger for protection.

Once you have sufficient materials, craft a workbench to unlock more crafting recipes. From the workbench, you can create walls for protection, and other work stations to advance in the game.

Bone Bench contains strong bone gear that is relatively easy to make compared to the other gears, you can and should craft them before more advanced items from the furnace are available.

When you are ready, you should start venturing into the caves to collect copper and iron. Do note that the caves are dangerous and you should be prepared.

Fishing in normal waters won’t be as profitable. But if you see treasure spots in water (some wired looking shadow shape), then rare treasure could be fished at a much higher rate.

Opening treasure chests will get your strong items to equip to aid you on your adventures.

Remember to do the quests from the “!” icon, as completing quests will get you diamonds and other cool items!

There are many bosses in the game and their difficulty varies from one to another. Remember to bring potions, healing kits, whatever you can to aid you in combat. Potions can be crafted from the alchemy table.