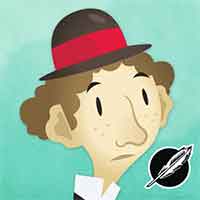 The protagonist named K. gets a sudden offer of employment. And this event changes his life, forcing him to make a distant voyage. To his surprise, the world beyond his homeland appears to be not as normal as he would think.

Together with K. you will experience an atmosphere of absurdity, surrealism, and total uncertainty.

• From the Creator of an Award-Winning Hamlet
• Original Logic Puzzles
• No inventory. No boss battles. No RPG features
• Only Absurdity and Surrealism

The Franz Kafka Videogame Act 1 Walkthrough
Follow the story and you will meet a woman and hypnotize her to see her dreams
On the first puzzle you need to help the girl to find her rabbit. Open the box and to see a flying monster.
Move objects to get a shape of giant bunny on middle:
– Tap K to move him a bit to the right
– Tap the giant 8 ball until it’s to the left of the little girl
– Tap the arrow sign so it points downward
– Tap the sun, then the cloud, then the sun again
Tap the girl’s lantern to shut off the lights and light up the rabbit’s silhouette.

After you wake up, the dog brings you a letter with second puzzle. Pull it out of the envelope and drag each of the three pieces of paper up or down until you have a line connecting from the arrow on left to the X on right.

Now you will get the third puzzle with dice
Roll the dice until the man stuck on the horse. Find the RUSH scrabble letters then tap a house wall near it to get a B tile and spell BRUSH.
Use the brush to draw a new path, then continue roll the die until he stops again for a coffee break.
Tap the little garage down at the bottom of the board until a car drives out. Before the car goes back in, roll the dice so it hits the car and drops into his coffee.
Now you can roll the dice again until he reaches his goal.

Tap on the pigeons and follow the dialogue for next fourth puzzle, where you on the war.
Pull the lever on the left canon and you will need an ammo.
Find out 4 symbols shape on right to get the AMMO by spelling each letter into shape like :
A = triangle
M = M shape
O = circle
Tap the lever and shoot on the tentacle monster.

After you woke up on the train, you need to to sign your name using typewriter which is the fift puzzle.
Fill in the K using the letters CHEAT, but you need to adjust the paper too. To do so, first press these letters : C and H.
Now tap the knob on the right side of the typewriter to move the paper.
Press these letters : E, A, T.
You will get a perfect K and finish the first act.